When pet films are laminated with foil (met pet), it will increase the film’s oxygen-water barrier and block out UV rays. Metalized films for flexible packaging are essential when the product requires extra protection to ensure a longer shelf life.

Metalizing of pet film under vacuum conditions is a proven technology to achieve special optical properties and reduce diffusion of gases and flavors through the film.

The most commonly used metal is aluminum but other metals can be applied also. 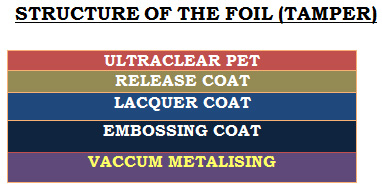 The metal layer is in direct contact with the polyester carrier film and no intermediate release layer is present. Surfactant is not present on the outer surface of the carrier film modifies metal adhesion to the polyester such that the metal can be removed in a metal transfer operation.

INTRODUCTION
As the move from rigid packaging to flexible packaging continues the barrier of materials used Becomes more important. In general, the use of Metalized films, and more specifically, the use of pet films, to achieve the barrier needed for shelf-life has been increasing for a number of
Years. There are several pet films from larger and larger groups of film manufactures for use in barrier (metalized) applications.

The interfacial region where metal atoms come into contact with the film surface may be simply Classified as mechanical, diffusion, chemical, and combinations of these types. The type of Interfacial region formed depends upon substrate Morphology, contamination on the surface, Chemical interactions, the energy available during interface formation and the nucleation behavior of the deposited metal.
In the case of metalizing pet film, the most important aspects of adhesion arise from mechanical and chemical bonding at the interface. The Mechanical interface is characterized by an Interlocking of the depositing metal with the rough surface of the substrate. The strength of this Interface will depend upon the mechanical properties of the materials being brought together: Metal and film. The chemical bonding depends upon The formation of chelates of the polymer Oxygen atoms with the metal atoms.

When the metal atoms strike the surface during deposition, they lose energy to the surface and Condense on the surface. During the condensation, the atoms have some degree of mobility on The surface defined by their kinetic energy and the strength and type of interaction between the Atoms, clusters of atoms and the substrate surface. The metal atoms / clusters will grow to form a continuous metallic film. It has been suggested That the atom density and growth mode determine. The effective interfacial contact area and the Development of voids in the interfacial region. Atom density and metallic crystal orientation Formed during the deposition can be affected by Environment (residual gas in the chamber), Contamination, surface inclusions (filler), and deposition techniques. In addition to the effective Contact area, the mode of growth of the metallic Film will determine the defect morphology in the Interface region and the amount of diffusion and reaction between depositing atoms and the Substrate. All of these contribute to the mechanical adhesion of the metal film being formed on The pet film substrate and to the barrier Properties of the final metalized film.

Pet film surfaces have been characterized to include carbonyl, hydroxyl, and vinyl groups. These Groups contribute to the surface energy of the Pet film. In addition, there are crystalline and Amorphous areas throughout the film. All of these have an affect on the adhesion of the metal to the Pet film. One of the advantages of pet is the surface groups available for chemical reaction (mentioned above). In the case of aluminum, a metal that forms a very stable oxide, reactions occur with the Surface groups to form chelates. Hence, the surface is conducive to wet out by the aluminum being deposited and has the ability to react with the groups at the surface to give chemical Adhesion. (other metals that produce oxides would likely react in a similar manner.)In polyethylene and polypropylene films which have a Low surface energy affecting the metal wet out at the interface and no oxygen containing groups for chemical interaction, metal adhesion Tends to be poor.

The other component of the adhesion of metal to Pet film is that of mechanical adhesion.

As mentioned above, pet film has crystalline and Amorphous areas. The adhesion of the metal Depends partly on the amount and size of the spheralites (crystalline areas) in the pet film. The
Energy from the evaporated metal is used to melt the surface giving anchors for mechanical Adhesion, and as mentioned above, that metal will react with the pet. The amorphous and Crystalline areas react differently to the incoming Metal. The amorphous areas allow the metal to‘drill’ farther into the film surface than the crystalline areas. The metal penetration is about 30-40Å.

From the information above, we can say that the total adhesion (Ta) of metal (aluminum) on pet Film is the sum of the chemical (ca) and mechanical adhesion (ma). For pet film the metal Adhesion is typically between 200-400 g/in.

In general, the total adhesion can be increased by increasing one or both of the components.

The main component Mechanical:
The depth of the aluminum atom penetrate into surface is important. According to TEM analysis of metalized pet film, the depth of penetration is in the 30-40Å.

The minor component Chemical: The reaction of the metal atoms with the pet chain from XPS analysis, there are aluminum chelated species formed.

Chemically similar to pet — good adhesion to the base film.
It has sites available for chelating with the aluminum metal
It is amorphous–increase the penetration of the metal in to the layer
It melts lower than pet films

Difference in the depth to which the metal was deposited. It appears that the aluminum Penetrates the co-polyester coating to a depth of approximately 50-75 Å. It is reasonable that the Aluminum should penetrate the co-polyester more than the pet control sample based on the Relative thermo-physical properties of the two polymers. Therefore, it appears that the increased Adhesion to the co-polyester is due to enhanced mechanical interlocking. Upon metallization, xps spectra showed new oxygen functionalities were created; one due to Aluminum oxide and others to aluminum-carboxyl ate-oxide species. From the known chemistry of pet and aluminum, these are chemically reasonable. For both the co-polyester coated pet

And the uncoated pet these functionalities were observed. There was no significant increase in Chelated species in the co-polyester samples versus The pet control film. Thus the increase in The adhesion of the aluminum to the chemically Coated film is entirely due to the increase in Mechanical adhesion.
When attempting to design a co-polyester for coating, it is not as easy as it sounds; the Mechanical adhesion is improved by The atom(s) drilling down into The coated surface of the Pet Film. One would think that the lower melting point of the co-polyester would make an excellent Adhesive layer. This is not necessarily the case.
There is a melting point range that is optimum for metal adhesion and the production of the film. In addition, the coating should not crystallize. Crystallization would interfere in the mechanical adhesion and lower the total adhesion.
Also, one must consider the chemical adhesion. Although not the major factor in metal adhesion, It still makes a contribution to the total adhesion.
When designing a co-polyester this must be Considered.

BARRIER
The reason the adhesion of aluminum to polyester is Important is to provide a barrier structure of Sufficient strength to give the required shelf life for a package. Metalized film continues to provide a path from rigid packaging to flexible packaging and many millions of pounds are produced each year. In general, the metalized chemically coated films have the same barrier (oxygen and moisture) as their non-coated counterparts.
However, some coated films have shown slight worse barrier properties than the uncoated film, yet have much better metal adhesion. This may beg the question of effective metal thickness: How much deposited metal is for barrier and how much for adhesion. If you significantly increase the penetration of the metal into a coated film Giving increased metal adhesion, can this metal also contribute to the barrier properties or does the metal deposited after this provide the barrier properties